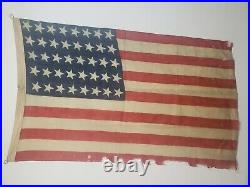 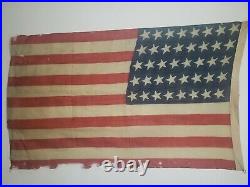 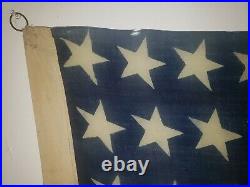 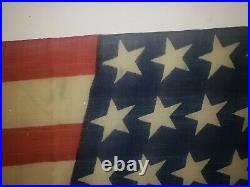 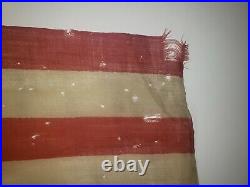 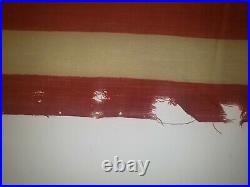 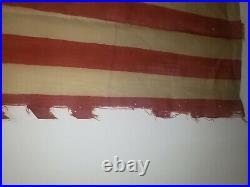 Colorado was the 38th state, entering the Union in August of 1876. Flag law mandates that a new star be added for each new state admitted on the July 4th following the admission of said new state. The 38-star flag therefore became official on July 4, 1877.

At that time, it became one of the longer-lasting star counts in our history, and the flag would have 38 stars for over a decade! In 1889, the nation was anticipating the admission of the Dakota Territory as the 39th state. Manufacturers began producing 39-star flags in preparation for Independence Day. However, the powers that be decided the Territory was too large, and should be split. Negotiations to define North and South Dakota lasted well beyond the summer, and July 4th came and went without the need for a 39-star flag. Finally, on November 2, 1889, North and South Dakota were admitted together as the 39th and 40th states. President Hayes signed the legislation after first shuffling the papers, so it is not known which state received his signature first. Some manufacturers jumped to begin producing 40-star flags, even though the change would not go into effect for nine months. They quickly learned they should not have done so. On November 8, 1889, just six days after the admission of the Dakotas, Montana became the 41st state. There would be no 40-star flag. Having been thus burned twice in 1889, manufacturers paused. Washington was admitted to the Union on November 11! In the span of nine days, four states had been added! As summer approached in 1890, manufacturers had to prepare for the holiday, and began producing 42-star flags in large numbers.

Unfortunately, they were burned again when Idaho became the 43rd state on July 3rd, 1890, just ONE DAY before the official flag change. There would be no 42-star flag. Now you know why 39 and 42 star flags are so easy to find. Sadly, the 43-star flag would become one of (if not) the rarest American flags for future collectors to obtain.

This because Wyoming was admitted as the 44th state on July 10. At six days, the 43 had the shortest tenure as having both the official AND current star count. However, since it was official, it was manufactured for most of the remainder of its year. So, this beautiful 40-star example is indeed a rarity, actually just a little harder to find than a 43. Since it was never official, nobody (outside of the Dakotas, anyway) was going to continue making them!

The 43 HAD to be employed by the government, armed forces, schoolhouses, and other institutions, and was destined to be made in greater number. This flag is made of wool, measures nominally 3x5 feet (35.25 x 59.50 inches, as near I can see), and is beautifully worn! Obviously, the bottom stripe has been tattered in several areas. There are small wear or moth holes in numerous places, which should be visible in the photos. You can see where the Union and Stripes were not perfectly positioned in the screening process: there is a bit of overlay of the colors. And perhaps a bit of tugging on the fabric caused that lower point of the first star to be misshapen? The heading is sewn down and includes three rings sewn into place. You will not be sorry to add this piece to your collection! As mom always said (quoting Keats, of course), A thing of beauty is a joy forever. The item "Vintage 40 Forty Star USA American Flag 1889 unofficial" is in sale since Thursday, December 24, 2020. This item is in the category "Collectibles\Historical Memorabilia\Flags & Pennants\United States, Country Flags". The seller is "davidpawson" and is located in Plano, Texas. This item can be shipped to United States, Canada, United Kingdom, Denmark, Romania, Slovakia, Bulgaria, Czech republic, Finland, Hungary, Latvia, Lithuania, Malta, Estonia, Australia, Greece, Portugal, Cyprus, Slovenia, Japan, China, Sweden, South Korea, Indonesia, Taiwan, South africa, Thailand, Belgium, France, Hong Kong, Ireland, Netherlands, Poland, Spain, Italy, Germany, Austria, Bahamas, Israel, Mexico, New Zealand, Singapore, Switzerland, Norway, Saudi arabia, Ukraine, United arab emirates, Qatar, Kuwait, Bahrain, Croatia, Malaysia, Barbados, Bangladesh, Bermuda, Brunei darussalam, Bolivia, Egypt, French guiana, Guernsey, Gibraltar, Guadeloupe, Iceland, Jersey, Jordan, Cambodia, Cayman islands, Liechtenstein, Sri lanka, Luxembourg, Monaco, Macao, Martinique, Maldives, Nicaragua, Oman, Pakistan, Paraguay, Reunion, Uruguay.