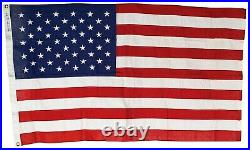 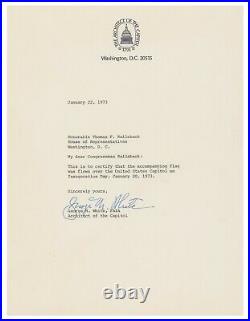 White to Congressman Thomas F. Railsback: My dear Congressman Railsback: This is to certify that the accompanying flag was flown over the United States Capitol on Inauguration Day, January 20, 1973. ACCOMPANIED WITH A SIGNED LETTER OF AUTHENTICITY FROM ARCHITECT OF THE CAPITOL TO CONGRESSMAN THOMAS F. RAILSBACK, THE FIRST INFLUENTIAL PRO-NIXON REPUBLICAN TO SUPPORT IMPEACHMENT. Nixon's second term would end unceremoniously with his resignation on August 9, 1974, following the Watergate scandal.

Representative Railsback was the first influential pro-Nixon republican to support impeachment. He was a member of the House Judiciary Committee who voted to refer articles of impeachment against President Nixon to Congress. This item is in the category "Collectibles\Historical Memorabilia\Political\US\Presidents & First Ladies". The seller is "grayautographs" and is located in this country: US.