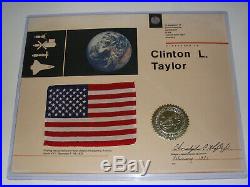 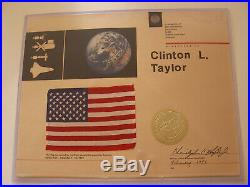 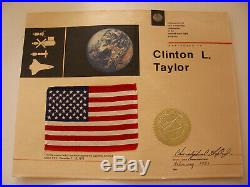 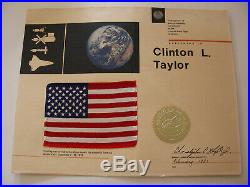 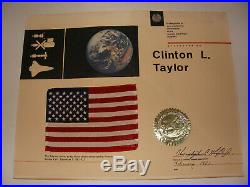 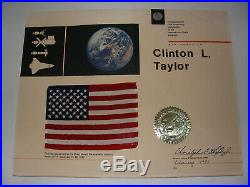 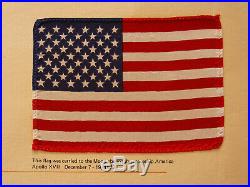 Certificate is approximately 11"x14" and the flag 5-5/8" x 4". Christopher Kraft's signature is autopen which is normal for these certificates.

There is some light staining at the top of the certificate mainly visible toward the right corner. It also has a moderate crease running down the center where it had been once folded. Clinton Taylor, the recipient, was very early involved with reviewing the construction of the spacecraft that would take the Apollo astronauts to the moon. He was awarded a NASA Exceptional Service Medal circa 1971 and among other positions served as Deputy Director of Administration while Philip Whitbeck served as Director. The late Michael Orenstein documented in April 2000 that he received "about" 15 of these small flags from Barker's estate to offer for sale after Barker was deceased. Barker himself never documented that he received more than a single flag but apparently someone from his estate provided Orenstein "about" 15 of these flags. Cernan himself only documented that he had a single flag within his PPK and that flag was a larger flag - not one of these 4"x6" variety - so there is even uncertainty whether any of these small flags traveled to the moon's surface. Cernan's authored PPK list therefore also contradicts a note made by Barker about the provenance of the flag or flags??? If you're interested but have trouble finding some of this information where it is available to be viewed online, please inquire. I have other NASA items currently listed. The item "Apollo 17 Space Flown to Moon USA/American Flag NASA" is in sale since Monday, September 30, 2019.

This item is in the category "Collectibles\Historical Memorabilia\Astronauts & Space Travel\Exploration Missions\Apollo". The seller is "user32546" and is located in Burnaby. This item can be shipped to North, South, or Latin America, all countries in Europe, all countries in continental Asia, Australia.