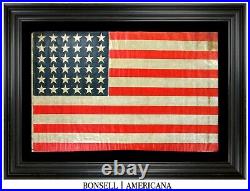 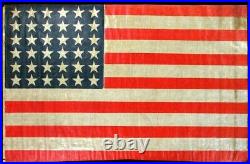 The stripes of this flag are closer to orange than red, and their appearance is striking. Such a color is a result of the use of either madder or cochineal to create the red dye, and is common in flags dating to between 1850 and 1870 (and to a lesser extent up to 1880).

This is a large scale flag that measures 31 by 49, which is two to three times larger than most of its parade flag counterparts. It was originally affixed to a staff, as indicated by the tiny nail holes along its hoist strip. It was most likely used at a parade or rally, perhaps to celebrate the end of the Civil War. The thirty-six star flag represents the inclusion of Nevada to the Union.

Nevada was admitted on October 31st, 1864, and this flag became official on July 4th, 1865. Nevada was originally part of the Utah Territory beginning in 1850, became its own territory in 1861, and became its own state in 1864. The timing of Nevada's inclusion was politically and economically based. Such timing was meant to benefit Lincoln and his fellow Republicans. For economic reasons, Nevada was included as part of the Union to help it pay off the countrys war debts.

Economically, Nevada was particularly attractive at the time, because of its significant silver mining industry. Nevada expanded its borders in 1866 when the western Utah Territory was added to its eastern side, and further expanded in 1867 when a portion Pah-Ute County in the Arizona Territory was added to its southern side. The thirty-six star flag was the official flag for the last six months of the Civil War, and was used by the military during that time. It was also the official flag during a portion of the Reconstruction era. The thirty-six star flag was official until July 4th, 1867, the time at which the thirty-seven star flag became official and began to represent the inclusion of Nebraska in the Union. Conservation Process: This flag was hand sewn to cotton fabric, and both were hand sewn to a mounting board. To prevent the black dye in the cotton fabric from seeping into the flag, it was first washed in a standard wash and then in a dye setting wash.

The flag is positioned behind Conservation Clear Acrylic (standard) or behind Optium Museum Acrylic (per request). Frame: This offering is in our X-Large Distressed Black Frame. Condition Report: This flag has tiny nail holes along its hoist strip. Additionally, this flag has some yellowing and discoloration, particularly along and parallel to its fly end.

These condition issues are age appropriate and are what gives this flag its desirable, folksy appearance. Every piece is handpicked and custom framed. Their offerings make for one-of-a-kind statement pieces, and they hang in beautiful homes, important offices, and noteworthy buildings across the country.

The item "36 Star Antique American Parade Flag A Large Scale Example Circa 1864-1867" is in sale since Sunday, December 13, 2020. This item is in the category "Home & Garden\Yard, Garden & Outdoor Living\Décor\Flags". The seller is "gb41735" and is located in Davenport, Iowa. This item can be shipped to United States, Canada.